“Grégoire is clearly in command of a broader harmonic knowledge, yet her playing style is all about elegance, subtlety, and understatement. No sharp edges mar her approach, and she builds her solos gradually and with great care.”

~ John Kelman, All About Jazz

As a solo player, Michelle provides a balanced and imaginative musical offering, while creating a direct connection with the listener. Solo piano is a perfect choice for cocktail parties, private house parties, dinners, and small banquets. This offering provides a continuous musical background that shifts with the mood of the room, ranging from a quiet intimacy to an energetic liveliness, and provides a more direct communication with the audience.

The Michelle Gregoire Trio is:

Pianist and composer Michelle Grégoire has toured across Canada with her quintet and her music is heard regularly on XM Radio and Galaxie satellite jazz programs. An active freelance musician since 1984, Michelle Grégoire maintains a solid reputation as a sideperson and band leader having appeared with artists such as Dee Dee Bridgewater, Peter Appleyard, Kenny Wheeler and others.

Bassist Rubim de Toledo combines the influences of his Brazilian cultural heritage, his passion for Cuban music, and his dedication to the jazz tradition to create a refreshing sound and to bring a rhythmic and conceptual depth to his bass playing. This keeps him a highly in- demand sideman for projects in any style and has also allowed him to nurture a fertile career as a bandleader.

Drummer Tyler Hornby has blossomed into one of the country’s most innovative and sought-after drummers. Hornby has also become a gifted composer by expanding his musical tastes, studying the craft with Grammy Award winning pianist Chip Stephens, and immersing himself in the work of other great players from all over the planet. His list of collaborators is wide and wealthy, including Bob Mintzer, Ingrid Jensen, Wycliffe Gordon, Frank Mantooth and many others.

“…a very fine balance among its musical ideas: Turcotte’s easy, swinging way of playing slightly behind the beat, MacDonald’s magnetic sound and the lightning reflexes that allow him to trace complex currents and melodic undertows as he herds his horn through the changes, Vivian’s bold, meaty sound and alert drive, Warren’s subtle, intuitive time-keeping. Gregoire herself plays transparent figures, clear melodic lines with a light touch and a glowing finish, and influences her quintet to play like a little big band — without the punch, but full of colour, leaving the intensity to the improvised solos — just exactly the kind of environment in which these first-rank players thrive.” 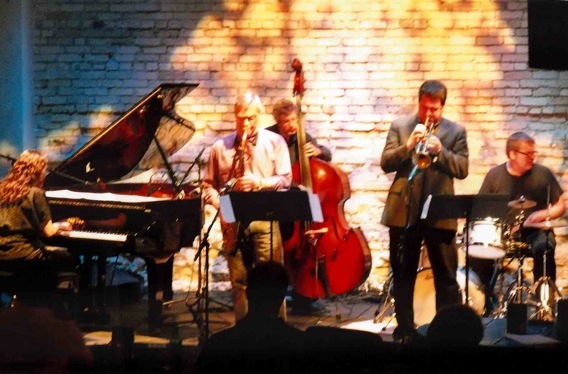 Pianist and composer Michelle Grégoire assembled this ensemble of award-winning Canadian musicians in 2004 when she recorded her first CD as a leader entitled Reaching. In 2010 she released a second recording with this ensemble entitled Diversity funded by the Canada Council for the Arts and Manitoba Film and Music. An accomplished composer Grégoire sought out to properly document her compositions after following the advice of Bob Brookmeyer who suggested she assemble the best band possible to inspire her to continue writing. Grégoire reached out to the Toronto jazz community to find her players – these musicians allow her to compose without reservation or limitations.

The Michelle Grégoire Quintet completed an 11 city Canadian Tour in 2006 thanks to funding from the Canada Council for the Arts and Manitoba Film and Music. The group was also featured in some major jazz festivals such as the Jazz Winnipeg Festival opening for Branford Marsalis, The Festival International de Jazz de Montréal , The TD Ottawa Jazz Festival, Prairie Scene Festival in Ottawa,  the All Canadian Jazz Festival, IAJE in Toronto and more. The quintet was nominated for the Grand Prix de Jazz and Galaxie Étoile competitions at the Festival International de Jazz de Montréal in 2006 and was recorded by CBC for national broadcasts on Espace Musique, Canada Live, After Hours and other programs. Both releases Reaching and Diversity earned a nomination as Outstanding Jazz Recording at the Western Canadian Music Awards and both recordings enjoy continued airplay making the top ten lists on jazz radio programs throughout North America.

All lessons are taught online for the time being.

I am pleased to announce that I am now on faculty at Morin Music in Calgary. This is an outstanding music school and facility geared towards excellence in musical training for all levels. In order to have a time earmarked with me at Morin Music, contact me first and then we can register you at Morin Music once a time is reserved.

I otherwise still accept intermediate to advanced jazz piano students, and at the moment these are for online lessons. For fees and to book lessons, please send me an email, or call me at (403) 228-1175.